Meet Ajna and SignNEXT, two Kerala-based startups that are showing how tech can work for masses

After winning GIC 2018, team Ajna is now headed towards the Silicon Valley where it will be incubated by the Singularity University for a period of 10 months.

Last week, Kerala government’s nodal agency for promoting entrepreneurship in the state– Kerala Startup Mission (KSUM)-organised a six-day-long event in Trivandrum. Global Impact Challenge (GIC) 2018, which was conducted in association with the US-based Singularity University, saw start-ups from across the country applying to bag a coveted spot in a competition that could score them an exclusive chance to learn from the tech experts in the Silicon Valley and take their product to the masses.

While the event saw nearly 150 startups from various parts of the country including some from Delhi and even Chhattisgarh applying to compete in the challenge, only 25 budding enterprises got a chance to participate in the event which saw speakers from Google, Microsoft, and Unity Technologies among others coaching and mentoring the founders of the participating enterprises.

Amid the 25 competing teams were two startups from Kerala which used a host of advanced technological tools to solve two of most prominent and often ignored problems of the society. While Ajna developed means to combat illegal logging and in the process tackle climate change using a combination of deep learning and blockchain technology, SignNext created a tool which provides sign language education to deaf people across age groups and backgrounds in India. The two teams were not only among the top ten finalists at GIC 2018 but have also won accolades for their work in the past.

Here what you should know about the two revolutionary startups from Kerala: 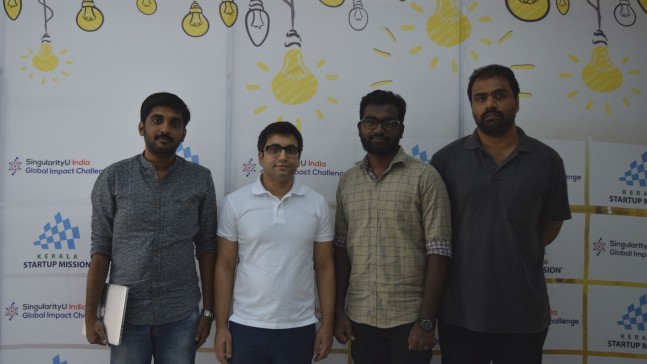 Logging is one of major causes of deforestation in the world. Illegal logging, which accounts for nearly 90 per cent of the logging activity in the world, constitutes 10 per cent of the global carbon emissions. Presence of vast forest lands coupled with a difficult terrain and a record maintenance system which done locally, is what makes countering illegal logging difficult particularly in a country like India.

Ajna uses a combination of autonomous drones, machine learning and blockchain technologies to counter illegal logging. And the simplicity of their plan is astonishing.

Drones record the video of a specified geographical boundary. That video is then taken into a deep learning system which counts the individual trees by their canopies. Next time the drone goes into that area, it looks for the differential amount, which is then recorded onto the blockchain.

If the drone finds a certain number of trees missing from a location it raises a flag and another stallion drone goes at a lower altitude with better optics and records and HD video of that place.

“So what happens is that you will be able to file an FIR based on this information autonomously. So basically, forest department gets 16 autonomously filed FIRs every quarter. So even if they choose not to act on it, we can actually say there were 32 warnings that were given by the system, you didn’t even touch one of them. It makes the system accountable to remove the corruption,” one of the founding members Jikku Jose told India Today Tech.

While Ajna, which is the brainchild of Nikhil Mohan, Jikku Jose, Jibin Mathew and Nathan Wadhwani, is primarily targeting governments, enforcement agencies like UN, non-profit organisations like WWF for countering illegal logging, their technology can also be used for produce detection, infrastructure monitoring and site evaluation.

Interestingly, team Ajna was working on a blockchain-based product when they stumbled upon a detail that directed them in working towards developing a solution for this environmental problem.

“We were working on a blockchain product for quite sometime now6-7 month back we stumbled upon this statistic that actually blew us off. This is the statistic- 90 per cent of deforestation is due to illegal logging and deforestation accounts for 10 per cent of climate change. Or in other words, if you remove illegal logging from the equation you are affecting 9 per cent climate change directly. So, if you are able to even 10 percent of that in even 5 or 10 years you are looking at a massive change globally,” he added.

After winning GIC 2018, team Ajna is now headed towards the Silicon Valley where it will be incubated by the Singularity University for a period of 10 months and also get a chance to get funding from the top investors in the industry. 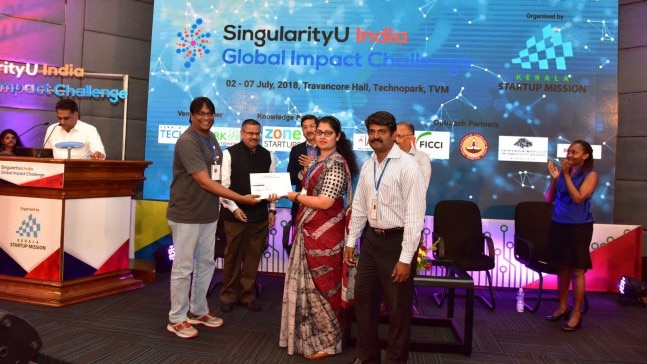 Literacy is often the first step that opens doors to awareness, education, skill enhancement, empowerment, and livelihood. However, people with hearing impairment often don’t get a chance to learn, earn a livelihood and grow because of their disability. Language often presents itself as one of the biggest obstacles in their path to a success.

Things are particularly difficult in a country like India where nearly 2 crore deaf people are denied access to education and information, and cut off from the rest of the society because there are no proper means to educate them.

SignNext is a Kerala-based startup that wants to change this existing trend. It’s on a mission of breaking this barrier and educating and in the process empowering nearly deaf community in India.

Brainchild of Kingsley David, Pravish Kumar and Theertha Nirmal, who is also the first deaf woman entrepreneur of the country, SignNEXT Assistive Technology LLP has developed an app called SignSKOOL that provides sign language education to people from all age groups and backgrounds.

“Our main target right now is to educate deaf children and young people, close to 30 lakhs of them. We want to teach them basic English,” he added.

So 500 deaf schools, thousand special schools and vocational schools in India don’t have sign language support. SignNext is tackling this problem by creating high-quality engaging modules in sign language for teaching in sign language and in English. The team using its app called SignSKOOL is also planning to teach the children the sign form of English using animated video based with titles and subtitles and graphic images, which in turn will help their users to understand the information better. The app will also feature special live sessions from experts.

The team SignNEXT has already distributed pre-loaded tablets to the deaf children in some remote villages in the country and they are planning to distribute more such devices as the funding comes in.

SignNEXT besides educating the deaf children has also taken up the cause of the empowerment of deaf women. “Also, primarily we are focused on deaf woman empowerment where we want to create a new echo system where we can connect to the women and people in the villagesWe want to create digital hubs or interaction hubs that will replicate knowledge,” David told India Today Tech.

“We want to give them (deaf people in India), a second change at learning, develop a culture of learning and engaging and empowerment,” he said.

What inspired this startup was a set of personal experiences. David was raised by his aunt who was deaf and years later when a deaf employee walked into his office and it proved to be the changing point in his life. “I was raised by my dad’s elder sister who was deaf. I was there since the day I was born till the age of 15. After 25 years, an employee walked into my company in Technopark and he was deaf,” he shared.

The team is developing a mobile application, which will feature all the learning modules. The app will be subscription based and it will provide interactive and educational modules to the deaf people at an affordable price.

SignNEXT was not only one of the top ten finalists at GIC 2018 but it also won a consolation prize at the event. The team will now be incubated at KSUM where it will get a chance to empower the masses.